5 Kyogen's Man in a Tree

Kyogen 'A man's hanging in a tree only by his teeth.
Somebody 'Why did Bodhidharma come to China?' Answer!
(The Koan-answer is the picture's caption!) 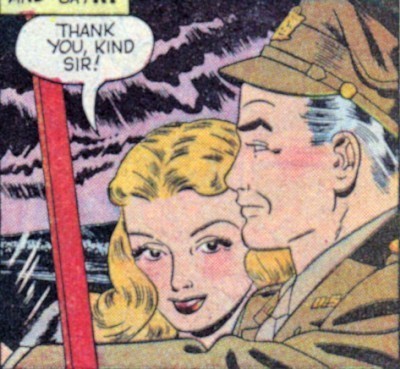 The master constructs a fictional situation: A man holding himself in a tree with his teeth only was asked "Why did Bodhidharma came to China?"
A tricky Koan.
Holding oneself in a tree just with the teeth will not last for long. The man will fall to his death. The question about Bodhidharma doesn't matter.

This rather brutal Koan is about life and death.

There's no way to cling to life for long. Let it got and die.
That has to be shown!

This fictional story sounds like a Zen version of a Shakespearian drama. "To be or not to be" that's basically what Hamlet, as well as Kyogen's man in the tree, has to decide.

Master Kyogen said: "Zen is like a man hanging in a tree by his teeth over a precipice. His hands grasp no branch, his feet rest on no limb, and under the tree another person asks him: 'Why did Bodhidharma come to China from India?'"

Whether the man in the tree does answer or not he will fall and lose his life. There's no alternative to death. Neither for Hamlet nor for Kyogen's man in the tree.


Zen Riddle #26-tongue :
Why is it not our tongue that we speak with?
Here's the answer....(Show/Hide)
say something

Here's an explanation if you want it.
Silly question. Just show that your speaking.

Xiangyan Up a Tree

Venerable Xiangyan said, "It is like a man up a tree hanging on a tree branch held in his mouth. He can’t use his hands to climb up the branch; his feet cannot step on the tree.

It happens that below the tree a person asks, ‘What is the meaning of the coming from the West?’

To disregard the other who questions is immediately not correct. If on the other hand, you are correct, your body is dead and your destiny is lost.

At that time what is appropriate; what can you put forth for a correct life?”

Mumon’s comment: In such a predicament the most talented eloquence is of no use. If you have memorized all the sutras, you cannot use them. When you can give the right answer, even though your past road was one of death, you open up a new road of life. But if you cannot answer, you should live ages hence and ask the future Buddha, Maitreya.

Wumen says: Even if it happens that you can suspend a river of discernment, you do not manifest the whole use. If you are able to expound the teachings of the one great Buddhist scripture, again you do not manifest the use. If from within you are able to correctly manifest, then alive still follow before the dead road beginning; dead still follow before the alive road beginning. Can’t you possibly be straight like that? Then, wait until the coming and ask Maitreya.

Kyogen is truly a fool
Spreading that ego-killing poison
That closes his pupils' mouths
And lets their tears stream from their dead eyes.