Joshu asks two hermits: "What's up?" Both raise a fist. Joshu said
"Schallow water!" to the first "Fully enlightened!" to the other.
(The Koan-answer is the picture's caption!) 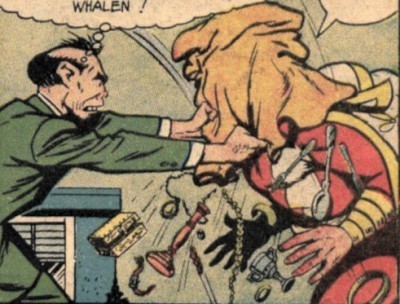 That's a very traditional Koan. The same action twice, but each is judged fundamentally different. One action shows stupidity, the other enlightenment. As there are no dualities, stupidity and enlightenment are just the same. Joshu tries to trick you into duality.

In medieval times Buddhist-masters were regarded as magicians. Many lived in the forests as isolated hermits. Some roamed the countryside, teaching their students while wandering around.
The story of the Koan seems simple but it's quite surprising.

Joshu went to a place where a monk had retired to meditate and asked him: "What is, is what?"
The monk raised his fist.
Joshu replied: "Ships cannot remain where the water is too shallow." And he left.
A few days later Joshu went to visit another hermit and asked the same question.
The monk answered the same way.
Joshu said: "Well given, well taken, well killed, well saved." And he bowed to the monk.

By finding the subtle difference, Joshu shows his magical power. It seems.

Here's an explanation if you want it.
How else can you pick a stone out of the water?

back to Zen Koans

Mumon's comment: The raised fist was the same both times.
Why is it Joshu did not admit the first and approved the second one? Where is the fault?
Whoever answers this knows that Joshu's tongue has no bone so he can use it freely.
Yet perhaps Joshu is wrong. Or, through that monk, he may have discovered his mistake.
If anyone thinks that the one's insight exceeds the other's, he has no eyes.

Wumen says:The same raised firm fists; for what purpose was one approved and one not approved? Just say, in which place were all the errors?
If from within you are able to issue one turning word, then you see Zhaohou’s tongue is boneless and very naturally it is able to rise up to help put in place or turn upside down.
Although, on the other hand, it is like the struggle affects Zhaozhou who retreats because of being destroyed by the two hermitage masters’ investigation.
If you say the two hermitage masters existed as superior and inferior you do not possess the eye of the three studies. If you say they were not existing as superior and inferior, you also do not possess the eye of three studies.

The light of the eyes is as a comet,
And Zen's activity is as lightning.
The sword that kills the man
Is the sword that saves the man.

Eye -- shooting star,
Function -- snatching lighting;
To kill a person -- a blade,
To keep a person alive -- a sword.