History of Buddha - Facts and Fiction

Zen Riddle #23-piss :
Does a dog in heaven piss in front of a Buddha shrine?
Here's the answer....(Show/Hide)
Go down on hands and knees, lift one leg like a pissing dog.

Here's an explanation if you want it.
Nothing holy about a Buddha shrine. But don't piss in the dining hall.

The history of Buddha is the legend of Siddharta Gotama, a 6th century BC Indian warrior, who first became a wandering ascetic, later a Buddha and finally a Chinese.

He was most probably born in 563 BC and belonged to a small North Indian Shakya tribe.

About 20 years after his the Shakya tribe where Buddha had come from was eradicated by other tribesmen.

Even these meagre biographical details of a brief history of Buddhism are uncertain. Each branch of Buddhism has its own version of it. Some experts in ancient india history doubt whether the Buddha ever existed.


Northern India during the Time of Buddha

An ascetic like Siddharta Gotamas Shakyamuni fits quite well into the cultural and political situation in Northern India during sixth and fifth century BC.

The Buddha's Tender Teaching of a Rich Monk

At this time Arayan tribes were still fighting continuous wars as they had done already for about thousand years.

Ascetic beggars, some were seen as sages (muni) preached non-violence (ahimsa) and social equality and opposed the religious sacrifice of cows by brahmins.

Most of these teachers developed new concepts of karma, soul, life and death. Some were only short-lived others lasted for centuries.

The Lost Sutra of Buddhas' Life

The "muni", the sage of the Shakya tribe, may have been one of these new preachers.

But the traditional history of Buddha is derived from a bunch of inconsistent legends.

The earliest was made up several hundred after his death and continuously extended with miraculous details.

But historical facts are less important for Buddhists, then the spiritual truth, the "dhamma". Just one example.

How Nagasena could vouch for the historical existence of the Buddha, the king asked, if he himself nor or of his immediate predecessors couldn't claim to have seen the Buddha personally.

Nagasena replied: The true historical Buddha can be perceived through the dhamma-body.

The dhamma is the Buddha, Nagasena said.

Already the birth of Siddharta Gotama is surrounded by fairy tales.

He was born, it was said, with a golden face. Immediately after being born he started walking and preaching his core message:

All the world is already enlightened!

His parents didn't want Siddharta to become a saint as they were foretold and shielded him from the world.

But Siddharta discovered the suffering of people and decided to become a holy man, a traditional ascetic.

But first he married and fathered a child. Only at the age of 29 years he left home to full-fill his mission.

Together with some friends he went into extreme ascetic practices. Gotama did his exercises always a bit harder.

After six years of torturing himself Siddharta was exhausted and nearly dead.
Spiritually he hadn't achieved anything. In this desperation Siddharta, the sage of Shakyas remembered some easy meditation techniques he had used as a boy.

He decide to give up the ascetic life except his meditation practice.

He only needed some month for mastering meditation until one day he saw the morning star.

He experienced the first Buddhist enlightenment and said again: All the world is already already enlightened.

The story of Buddha's shortcut to enlightenment a workaround ascetic practices challenged the brahim teachings of his time.

His friends left him but came back when he proved his supreme Buddhahood through supernatural spiritual abilities (abhijna).

Some examples: he travelled long distances through the air, he fought the queen of the snakes with fire and discovered the thoughts of a follower, who wanted to kill him.

The Buddha attracted hundreds of followers during his exceptional long life and died from eating a rotten meal, perhaps pork although other legends talk about poisonous vegetable.

After his death more and more stories about Buddha in the ancient history of India were created and became part of his teachings. This mixtures of life and lectures is called sutras.They were only orally transmitted and always starts with: I have heard, that..

Confuzian and Taoist intectuals (the literati) were surprised and attracted when the Buddha's teachings were brought to China in first century CE. These assumptions provided a framework to translate and interpret Buddhist teachings. But there was a problem in Buddhism history.. The teachings were only orally transmitted from generation to generation. 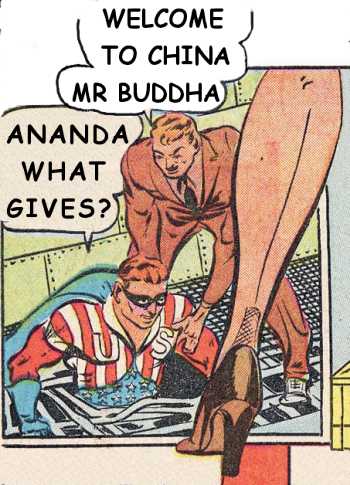 All of us waited so Long for YOU.

Indian monks were used to learn and memorise very long sutras by heart. But the Chinese with 2000 years of writing tradition couldn't believe it.

The Indian monk Buddhayasas when he came to China knew by heart 200.000 verses of sutras.
Emperor Yao Xing didn't believe it and wanted to examine the monk.

He was given 40 pages with lists of medical recipes and population registrations forms.

Buddhayasas memorized all these pages in three days and recited it with not a single mistake.

The Emperor was speachless.

Fortunately the Chinese translated the oral Buddhist tradition in writing.

As a Chinese the Buddha lost his Indian aura of religious perfection.

Instead he became an outstanding philosopher similar to Lao-tzu and Confucius.

Return from history of Buddha to Home Page
Copyright ©2010-2023 by Reinhard Koch, heartofmeditation.com All rights reserved.