Zen Riddle #28-leg :
What is my leg compared with donkey's leg?
Here's the answer....(Show/Hide)
walk on hand and knees

Here's an explanation if you want it.
That's the donkey-Buddha walking on his four legs, isn't it?

The mystic, the scientist and the priest walk on different ways to explain the world and to find the meaning of life in science, mysticism or spirituality.

Here are their steps: 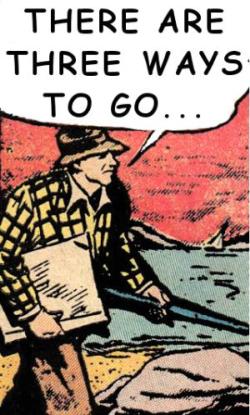 The Ways and the Guides

In ancient times there were only mystics walking the holy ways guided by their experiences.

They were called shamans, magicians, ascetics, healers or prophets.

They were in contact with supernatural powers and close to spirits that guarded or endangered their tribes.

Some thousand years later spirituality was professionalised by high priests.

They passed their job down within the family.

They became powerful spiritual leaders: guardians of holy places, of the scriptures and secret knowledge.

The latter function of high priests was the starting point of science, which became independent from priesthood and religion only in modern times.

Today's scientists find out about the world guided by experiments and the laws of nature only.

Mysticism and spirituality only make sense if there is "transcendence", a separate reality beyond time and space that influences the normal reality.

Transcendence is where the mystic's experiences come from, and where all priests and religions are connected to.

Shamans and priests depend on this belief. 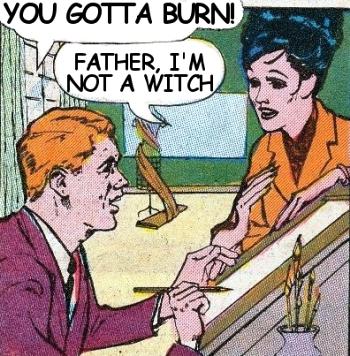 True religion has to save souls at all costs

But transcendence, mysticism, insight and spiritual knowledge don't contribute to the explanation of modern life any more.

Today's world views are based on realism and science.

And those who want to know about the meaning of life are supposed to ask their shrink not the parish priest or a local magician.

But a growing number of people aren't comfortable with this kind of answers.

Science, it seems has become less convincing and trustworthy.

Are there any alternatives?

The criticism made by evangelical Christians, fundamental Muslims or orthodox Jews

is seen as a stupid roll-back program ignoring the facts and eventually misleading people into violence.

Traditional religion survived in developing countries and in pockets of the first world. Millions of people still trust tradition, priests and mystics.

Quantum mechanics found out that the world sometimes changes just by looking at it. That's inconsistent with the laws of nature as we know them.

There are more similarly disturbing findings.

According to quantum mechanics, the world can switch between its material form that everybody is aware of and an invisible state of waves, with no weight or form. 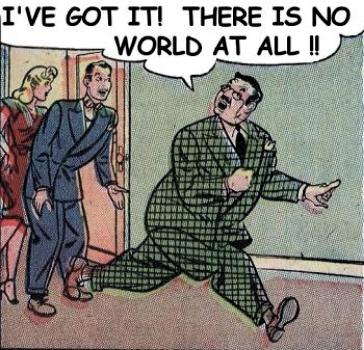 A scientist has changed into a mystic

Quantum mechanics deals with smallish sparks of the material world isolated from everything else.

Looking back, mystics of all times and cultures easily moved between reality and the invisible world of spirits.

Ancient Shamans healed or cursed people just by looking at them.

These powers were concentrated in smallish objects, in a fetish, a talisman or an amulet.

Priests, mystics and shamans explained their results in terms of their transcendent world of spirits and gods.

Scientists have no good explanation for their strange findings but only mathematical formulas.

Which explanation of the world is more trustworthy?

Fortunately in everyday life there's no need to explain the world but only to live in it.

Most people are comfortable in a world, which leaves science to decide what is true, right, necessary and what's not. 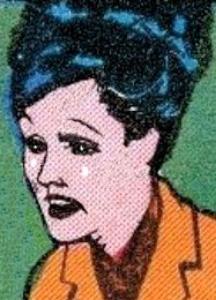 What's the meaning of life?

Yet, at exceptional occasions, like baptising a new born child, solidifying a partnership, or preparing a funeral, science doesn't provide help or services but religion does.

Today's pragmatic use of religion is not the whole story.

Sometimes we are overwhelmed by doubt, a decision or a responsibility and we suspect there might be a helpful spiritual solution.

But how to find it? How to get help?

Meditation can be used as a do-it-yourself spiritual advice system.

It's the old but effective way of shamans and mystics to solve human riddles.
They were trained just to look at a problem without thinking about a solution.

In the same way meditation works in science, mysticism or spirituality until eventually an advice pops up.
It takes some time to walk this way. But it's worth trying.