46 Step from the Top of a Pole

Sekiso 'How do you step forward
from a 100 m Pole?
(The Koan-answer is the picture's caption!) 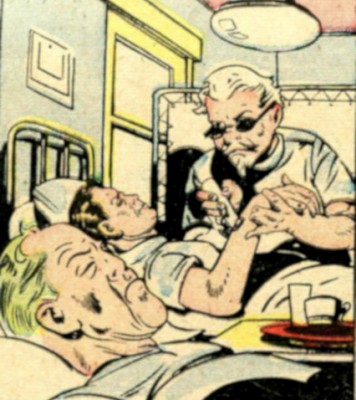 The full text of the Koan is even more frightening than the short version for its about sitting on top of a terrible high pole.
Nobody knows exactly why Sekiso quotes this story. I think he wanted to test his disciples.

It's said, he once visited a cousin who was a famous Zen-master.
When Sekiso arrived at this monastery he shouted fire, fire, fire. All the monks ran away to look for the fire. Including the master.
Sekiso turned around and went away.

It's the same with this pole. It's high, high high. Keep your balance, don't fall down. Don't move, the old master warned.
Respond like Sekiso did at his cousin's monastery. Just walk away. There was no fire, there is no pole.

Here's an explanation if you want it.
Everyday the same things to do. Today, yesterday, tomorrow. Just do it.

Mumon's comment: One can continue his steps or turn his body freely about on the top of the pole. In either case he should be respected.
I want to ask you monks, however: How will you proceed from the top of that pole? Look out!

Wumen says:If your step is able to advance, if your body is able to fly, then instead of disliking, what place is not fit to be esteemed?
Thus, supposing you are like that, just say, so how do you step forward from the top of a one hundred foot pole? Hah!

The man who lacks the third eye of insight
Will cling to the measure of the hundred feet.
Such a man will jump from there and kill himself,
Like a blind man misleading other blind men.

One-eyed, but it is the eye in the gate of the crown.
It is a mistake to conclude the stars are in a shallow bowl.
Able to disregard body and abandon life,
One of the blind leads the multitude of the blind.