9 A Buddha before History

Asked, why Daitsu, a Buddha
before history, didn't realize the truth,
Seijo 'Because he did not.'
(The Koan-answer is the picture's caption!) 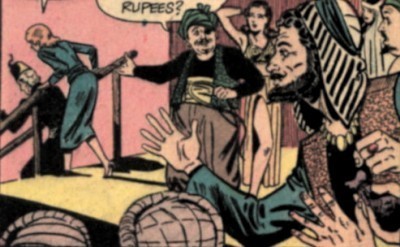 Do something: get up, dress, work.

One of the basic beliefs in Zen: There is no reason or understanding. Reasoning leads you nowhere. Everything is as it is. To question the enlightenment of an ancient Buddha is just nonsense. Don't think and ponder about legends.
Just do your daily things.

In Buddhism there's a belief in a long chain of different Buddhas who lived in different times of universal history. Shakjamuni Buddha was therefore only one of many Buddhas. The Koan refers to Daitsu Chisho, who was seen as an extremely wise Buddha who penetrated the wisdom of the universe. The Chinese version of the Koan tells a bit about Daitsu Chisho.
This background may explains the monks surprise about Seijos answers.

A monk asked Seijo: "I understand that a Buddha who lived before recorded history sat in meditation for ten cycles of existence and could not realize the highest truth, and so could not become fully emancipated. Why was this so?"
Seijo replied: "Your question is self-explanatory."

The monk asked: "Since the Buddha was meditating, why could he not fulfil Buddha-hood?"
Seijo said: "He was not a Buddha."


Zen Riddle #30-melting :
Why is a Buddha of metal melting when he passes through furnace?
Here's the answer....(Show/Hide)
fall to the ground and die.

Here's an explanation if you want it.
If you go through furnace, what will happen? You'll die.

Venerable Xingyang Rang:
Because a monk asked, "Great-penetration Wisdom-winning (Daitōng Zhishèng) Buddha sat for ten aeons (kalpas) at a site of the Way yet did not manifest the Buddha Dharma and was not able to accomplish the Buddha Way.
What was he practicing in that time?"
Rang said, "That question is very attentive and appropriate."

The monk said, "Since he indeed sat very much at a site of the Way, why was he not able to accomplish the Buddha Way?"
Rang said, "He did not accomplish Buddhahood."

Mumon's comment: I will allow his realization, but I will not admit his understanding. When one ignorant attains realization he is a saint. When a saint begins to understand he is ignorant.

How does knowing the body resemble knowing the joy of the heart-mind?
Being able to know the heart-mind – body not worried;
Also if body and mind are both completely known,
Why should one still hope to become a holy immortal?