A monk quotes a famous master.
Umon 'You're on a sidetrack.' Why?
(The Koan-answer is the picture's caption!) 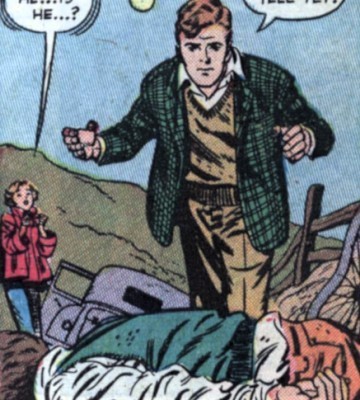 This Koan seems quite complicated. Several masters of different generation are involved, a famous poem etc. It's a "construction". "Good morning, master", means you jump out of it.

A Zen student told Ummon: "Brilliancy of Buddha illuminates the whole universe."
Before he finished the phrase Ummon asked: "You are reciting another's poem, are you not?"
"Yes," answered the student.
"You are sidetracked," said Ummon.
Afterwards another teacher, Shishin, asked his pupils: "At what point did that student go off the track?"

Reciting poems in medieval China was a sign of being educated, especially the poem of a person who was part of the elite. This monk did exactly that, but was rebuked by Umon quite rude. In this way Zen-master Umon disqualified himself as an educated man.

Much later an other master tried to repair Umons reputation as learned man and re-framed Umons reaction so that it was less challenging for Chinese conventions.


Zen Riddle #37-freedom :
The principle of Zen is complete freedom. Why?
Here's the answer....(Show/Hide)
walk around, sing

Here's an explanation if you want it.
The why of Zen is a principle of everything, don't bother.

Yunmen: Because a monk asked, "The brilliant light silently illuminates the whole river and sands . .",
the one sentence was not yet ended when Men quickly said, “Aren’t those the words of the excellently gifted Zhangzhuo?"
The monk said, "Yes,"
Men said, "Idle speech!"
Coming after, Sixin picked this up and said, "Just say, what point is within this monk’s idle speech?"

Mumon's comment: If anyone perceives Ummon's particular skillfulness, he will know at what point the student was off the track, and he will be a teacher of man and devas. If not, he cannot even perceive himself.

Wumen says: If within you are able to see how Yunmen uses the point of solitary danger of this monk’s reason for his idle speech, then you are able to give to people and gods [devas] as a teacher. If you still are not yet clear, you are not able to save yourself.

When a fish meets the fishhook
If he is too greedy, he will be caught.
When his mouth opens
His life already is lost.

A fishhook hangs in the torrent
Catching those who are greedy for the bait.
The first time the mouth cracks open
One’s life is lost nevertheless.