14 Nansen Cuts the Cat in Two

Nansen says
"With one word of Zen, you save this cat."
Silence. Nansen cuts the cat in two.
(The Koan-answer is the picture's caption!) 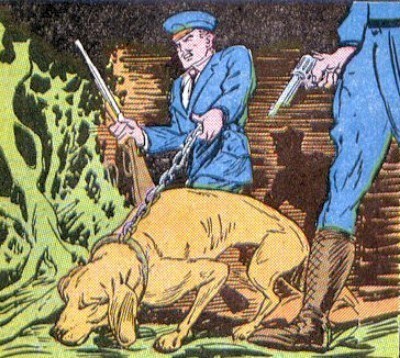 Cry out like a dying cat.
Place your shoes on your head and go.

Both answers are rather conventional:
Identification with the dying cat or copying Joshu's reaction (in the background story) when he was told about the event. Both are good examples of absurd comments on an absurd story.

Nansen saw the monks of the eastern and western hall fighting over a cat.
He seized the cat and told the monks: "If any of you says a good word, you can save the cat."
No one answered. So Nansen boldly cut the cat in two pieces.

That evening Joshu returned and Nansen told him about this. Joshu removed his sandals and, placing them on his head, walked out.
Nansen said: "If you had been there, you could have saved the cat."

This story is famous, because it's deeply disturbing.
Buddhists are not supposed kill any sentient being. That's their vow. Nansen kills a cat, just to teach his students about the immediate answer to a challenge.
(By the way, some later commentator said, Nansen didn't kill the cat, he only performed a killing trick.)

Joshu's reaction seems to disapprove of the killing. But he reacts on Nansen's story with what was at hand, his shoes.

It's a strange Koan. Who will ever understand?

Zen Riddle #41-same :
You attain enlightenment. But it doesn't change, remains the same.
Here's the answer....(Show/Hide)
Stand up, run around: that's it.

Here's an explanation if you want it.
Is your everyday life any different? Today? Tomorrow? Any day?

Venerable Nanquan: Because the Eastern and Western halls were arguing over a kitten.
Quan therefore held it up and said, "If the great assembly is able to speak quickly it can be saved, but if not able to speak quickly then it is eliminated by beheading.”
The Assembly was without a correct response, so Quan carried out the cat’s departure.
In the evening Zhaozhou returned from outside.
Quan showed what happened to Zhou.
Zhou consequently took off his shoes and placed them above his head and exited.
Quan said "Mister if you were there your quickness would have been able to save the kitten."

Mumon's comment: Why did Joshu put his sandals on his head?
If anyone answers this question, he will understand exactly how Nansen enforced the edict. If not, he should watch his own head.

Wumen says:Just say, what was the living meaning of Zhaozhou putting the grass shoes on top of his head?
If within you are able to issue one turning word, then you see Nanquan’s decree is not a vain act, and in that case maybe he is not dangerous.

Had Joshu been there,
He would have enforced the edict oppositely.
Joshu snatches the sword
And Nansen begs for his life.

If Zhaozhou were there,
His act would have turned the decree upside down,
Seizing and removing the mister’s blade,
Leaves Nanquan begging for life.