Monk 'Please teach me!'
Joshu 'Have you had your rice porridge?'
Monk 'Yes, master.' Joshu 'Wash your bowl!'
(The Koan-answer is the picture's caption!) 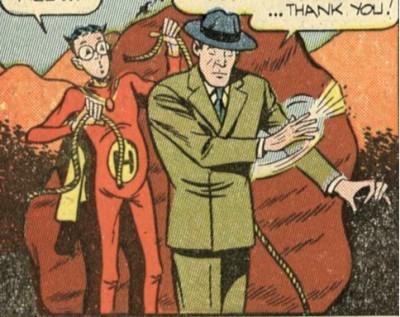 This monk goes over the top! Joshu gets him down to earth. In this moment the monk's illusions break down and he gets some insights into what Zen is: just doing the ordinary things. Nothing special. Just live your everyday life.

In medieval times Buddhist monks, like today's backpacker, travelled long distances to see a famous master. This was seen as the sign of a true longing for enlightenment.
A highly motivated monk told Joshu: "I have just entered the monastery. Please teach me."
Joshu asked: "You have not even finished your rice porridge."
The monk replied: "I have eaten enough."
Joshu said: "Then you'd better wash your bowl."
At that moment the monk was enlightened.


Zen Riddle #35-arise :
How does the Buddha's dharma arise from the supreme way?
Here's the answer....(Show/Hide)
sit down.

Here's an explanation if you want it.
Arising something from some other thing than your bum makes no sense. Stay sitting.

Mumon's comment: Joshu is the man who opens his mouth and shows his heart.
I doubt if this monk really saw Joshu's heart.
I hope he did not mistake the bell for a pitcher.

Wumen says: When Zhaozhou opens his mouth one catches sight of his gallbladder and he exposes his heart and liver.
This monk heard the matter.
It is not reality to pretend the call of the bell is an urn.

It is too clear and so it is hard to see.
A dunce once searched for a fire with a lighted lantern.
Had he known what fire was,
He could have cooked his rice much sooner.

Simply act in differentiation to arrive at clarity;
Searching makes one’s income to be late;
The beginner understood the lamp is fire;
The cooked rice was done already too long a time.