38 The Ox in the Window Lattice

The ox passes through the window completely.
... why the tail cannot pass through?
(The Koan-answer is the picture's caption!) 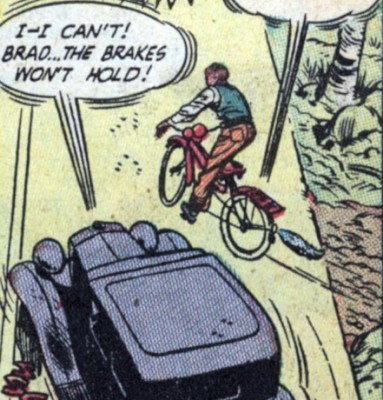 Strange story. Why should any ox ever try to jump through a window? Don't be distracted. It's a nonsense story which needs a nonsense answer.
Wag your little finger like a tail!

Goso said: "When a buffalo goes out of his enclosure to the edge of the abyss,
his horns and his head and his hoofs all pass through, but why can't the tail also pass?"

There are lots of interpretations.
Most of them explain, the Ox that's a person (you or me or I), that has not become free yet, didn't attain Buddhahood, enlightenment or how ever you want to call it.

The theory behind this interpretations is called "sudden enlightenment".
Before you've attained this state of mind, only "your ox-body" has gone into the framework of Buddhism. The "end" is missing, the tail.
But the tail isn't the most important part of an ox, is it?

For Zen-people, who believe in sudden experiences, the tail is most important. Without the tail the ox is nothing. What a strange believe. Cutting off the tail won't change an ox!


Zen Riddle #38 - difference :
Does a hairs-breath difference equals the distance between heaven and earth?
Here's the answer....(Show/Hide)
hearing the bird, the voice etc.

Here's an explanation if you want it.
The bird, the voice, the wind have no distances or differences.

Wuzu said, "For instance, a water buffalo (bull ox) passes through the window lattice;
the head, horns, and four hoofs all pass through completely. What is the reason why the tail cannot pass through?”

Mumon's comment: If anyone can open one eye at this point and say a word of Zen, he is qualified to repay the four gratifications,
and, not only that, he can save all sentient beings under him.
But if he cannot say such a word of true Zen, he should turn back to his tail.

Wumen says:If within you invert, are able to manifest one single eye, and are able to issue one turning word,
you can rise up to declare the four loving-kindnesses and descend to give aid in the three realms of existence.
Maybe you are not yet like that? Then you still must look after and attend to the tail to be able to begin.

If the buffalo runs, he will fall into the trench;
If he returns, he will be butchered.
That little tail
Is a very strange thing.

Formerly, one resisted falling into the moat;
Now, circling back and arriving in retreat due to being destroyed.
This little “baby” tail,
Frankly, is more than strange.