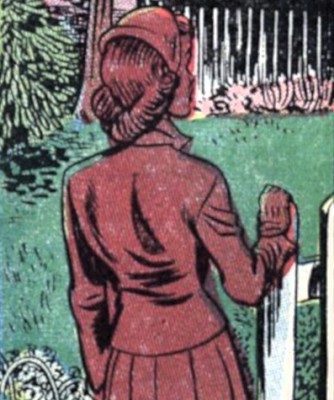 To teach his monks a lesson, he first seems to accept their view and goes to test woman. When he comes back he just says he tested her. In reality he just walked out and came back.

It's all about walking. The monks walked up the mountain, Joshu walked up and down. "Enlightenment" only existed in the monks thinking.

There's another twist in this Koan the gata-poems refer to.
The exchange with the old woman was the same with the monks and with Joshu himself.
Unlike other Koans (case 26, case 11) this had no meaning. The question as well the answer are only obstacles the gata-poems say.

A travelling monk asked an old woman the road to Taizan, a popular temple supposed to give wisdom to the one who worships there.
The old woman said: "Go straight ahead." When the monk proceeded a few steps, she said as if to herself: "He also is a common church-goer."

Someone told this incident to Joshu, who said: "Wait until I investigate." The next day he went and asked the same question, and the old woman gave the same answer.
Joshu remarked: "I have investigated that old woman."

In older societies women very often didn't survive their fertile lifespan. Older women were seen as "special", in a good or nasty way. They could be witches or experienced midwives, ghosts or a person with higher knowledge.

The monks had their superstitious understanding of "enlightenment" attached to an old woman.
That's what Joshu attacked.

The second, the Chinese translation of the Koan seems different, for Joshu said he "defeated" the old woman.
That's just another confusing turn for it relates to another superstitious belief that a fully enlightened Person can "defeat" a lesser enlightened person.
The comment explicitly points to this common belief just to intensify reader's the confusion.


Zen Riddle #58-well2 :
Why does a clearly enlightened monk falls into a well.
Here's the answer....(Show/Hide)
It's really dark down here. You can't see anything.

Here's an explanation if you want it.
Monks are stupid anyhow. Why bother?

Zhaozhou: Because a monk asked Madam Old Woman "What place do I go for the direction of the path to Lookout Mountain?"

The Monk only walked three fives (15) steps and the Old Woman said, "A good teacher’s monk again goes in this way?"

It happened afterward that the monk raised this in appearing to Zhou.
Zhou said, "Wait, I’ll go for you to investigate any faults of this Madam Old Woman."

Zhou returned and called the assembly saying, "I investigated Madam Old Woman of Lookout Mountain for you and completely defeated her besides.”

Mumon's comment: The old woman understood how war is planned, but she did not know how spies sneak in behind her tent.

Old Joshu played the spy's work and turned the tables on her, but he was not an able general. Both had their faults.

Now I want to ask you: What was the point of Joshu's investigating the old woman?

Wumen says: Madam Old Woman only understood sitting and planning in the tent and waiting in ambush. She didn’t recognize the insurgent’s trick.

Old Man Zhaozhou was skilled at using stealth in his function to raid the enemy’s encampment.
Again, his was just not a great person’s examining.
To pick up and examine this for the future: the two both have faults.

Just say, what was within the investigation of Zhaozhou to defeat the place of Madam Old Woman?

The questions were both the same,
The replies were also similar.
Inside of the cooked rice there was sand;
In the middle of the mud there were thorns