Daibai asked Baso: "What is Buddha?"
Baso "This mind is Buddha. Why?"
(The Koan-answer is the picture's caption!) 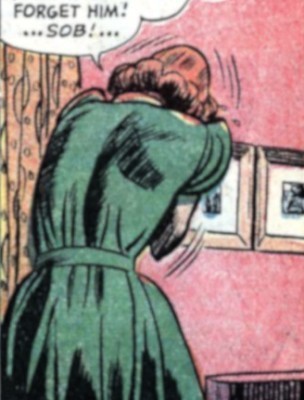 Baso it was said developed the so called encounter dialogue. His trick was, to confuse his students by stupid, disputable or even wrong statements (like in this case).
But why is master Baso telling bullshit? Simply because the question was already bullshit!

Being lost the student has to jump out of the box of his expectations and knowledge.
This means he or she is free to forget the dialogue. What ever comes in the mind is a good Koan answer!

A rather complicated Koan, for Baso says: "This mind is Buddha". That's seems definitely wrong for in case 33 Baso answers the same question by "The mind is not Buddha."
Logical contradictions are quite common in Zen-Buddhism, for it insists on "Non-duality". Yes and no are equally right. There's not one side and the other side. Both are the same.

In this way a Zen student is forced to find a Koan solution not by thinking but intuitively. Intuition is a personal process and that's what's needed to find your Koan answer.

That's what Mumon means when he talks about "washing your mouth" in his commentary.
Baso is famous for his method of confusing students in order to cut off their "attitude" of thinking.


Zen Riddle #57-way :
Why is the way intrinsically already accomplished?
Here's the answer....(Show/Hide)
There, see, those mountains, these trees, this ground, that wall

Here's an explanation if you want it.
Look at this world. There's nothing to do. All is there.

Mazu: Because Damei asked, "So, what is Buddha?"
Zu said, "As it is heart-mind is Buddha."

Mumon's comment: If anyone wholly understands this, he is wearing Buddha's clothing, he is eating Buddha's food, he is speaking Buddha's words, he is behaving as Buddha, he is Buddha.

This anecdote, however, has given many a pupil the sickness of formality.

If one truly understands, he will wash out his mouth for three days after saying the word Buddha, and he will close his ears and flee after hearing "This mind is Buddha."

In that case, although there is comparing, how many people has Damei led to [MM43] firmly believe the error that the stars are in a shallow bowl.

Striving to know the Way, if you speak the single word “Buddha,” then wash out your mouth for three days. If there is a single fellow you see saying, "As it is Mind is Buddha," then cover up your ears and run.

Under blue sky, in bright sunlight,
One need not search around.
Asking what Buddha is
Is like hiding loot in one's pocket and declaring oneself innocent.

Blue sky; clear day.
To cut close, abstain from seeking.
To ask further, "So, what?"
Is embracing stolen goods while calling out "Injustice!"