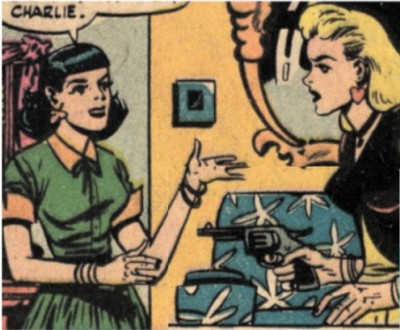 
An explanation of the Koan answer:

The nice background story of this Koan deals with the Buddhist theory of enlightenment.

But Zen goes some steps further down the road to nothingness and hell.

By telling a magical story and acting it out Hyakujo mocks magic, enlightenment, Buddhism and science.

How stupid and useless all this theoretical pondering is! It makes a fox howl "Juiii, juiii, juiiii".

The background story of this Koan.

Once when Hyakujo delivered some Zen lectures an old man attended them, unseen by the monks. At the end of each talk when the monks left so did he. But one day he remained after they had gone, and Hyakujo asked him: "Who are you?"

The old man replied: "I am not a human being, but I was a human being when the Kashapa Buddha preached in this world. I was a Zen master and lived on this mountain. At that time one of my students asked me whether or not the enlightened man is subject to the law of causation. I answered him: 'The enlightened man is not subject to the law of causation.'

For this answer evidencing a clinging to absoluteness, I became a fox for five hundred rebirths, and I am still a fox. Will you save me from this condition with your Zen words and let me get out of a fox's body? Now may I ask you: Is the enlightened man subject to the law of causation?"

Hyakujo said: "The enlightened man is one with the law of causation."

At the words of Hyakujo the old man was enlightened. "I am emancipated," he said, paying homage with a deep bow. "I am no more a fox, but I have to leave my body in my dwelling place behind this mountain. Please perform my funeral as a monk." Then he disappeared.

The next day Hyakujo gave an order through the chief monk to prepare to attend the funeral of a monk. "No one was sick in the infirmary," wondered the monks. "What does our teacher mean?"
more./.less
After dinner Hyakujo led the monks out and around the mountain. In a cave, with his staff he poked out the corpse of an old fox and then performed the ceremony of cremation.

That evening Hyakujo gave a talk to the monks and told them this story about the law of causation.

Obaku, upon hearing the story, asked Hyakujo: "I understand that a long time ago because a certain person gave a wrong Zen answer he became a fox for five hundred rebirths. Now I want to ask: If some modern master is asked many questions and he always gives the right answer, what will become of him?"

Hyakujo said: "You come here near me and I will tell you."

Obaku went near Hyakujo and slapped the teacher's face with his hand, for he knew this was the answer his teacher intended to give him.

Hyakujo clapped his hands and laughed at this discernment. "I thought a Persian had a red beard," he said, "and now I know a Persian who has a red beard."

Here's an explanation if you want it.
Three steps are three steps, who ever walks them.

The old man asked, "Does the person with a foundation in the great practice of the teachings still fall into cause and effect or not?"

Baizhang said, "Not in the dark about cause and effect."

Not falling, not ignoring:
Two faces of one die.
Not ignoring, not falling:
A thousand errors, a million mistakes.