Tokusan went to dinner too early. Ganto said:
"Old Tokusan doesn't know the last word."
What is the last word?
(The Koan-answer is the picture's caption!) 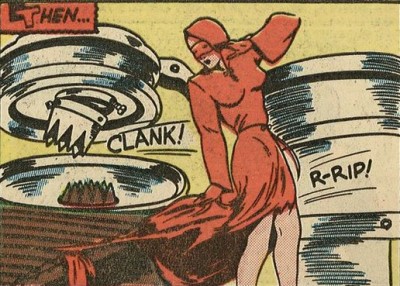 A funny Koan, which makes a fool of the reader.
It seems to be a conversation about "The last word", the essence of Zen.
But the answer just takes the expression literally. The last word (of a day) is "good night!", isn't it?

Tokusan went to the dining room from the meditation hall holding his bowl.

Seppo was on cooking duty. When he met Tokusan he said: "The dinner drum hasn't been beaten yet. Where are you going with your bowl?"
Tokusan returned to his room.
Seppo told Ganto about this. Ganto said: "Old Tokusan does not understand the ultimate truth."
Tokusan heard of this remark and asked Ganto to come to him. "I have heard," he said, "you do not approve my Zen." Ganto told him, what he intended to do. Tokusan said nothing.
The next day Tokusan delivered an entirely different, strange kind of lecture to the monks. Ganto laughed and clapped his hands, saying: "I see our old man understands ultimate truth indeed. No one in China can surpass him."

Again a story featuring a "demented" master. Some of his students made jokes about him until Gato spoke about the "ultimate truth". This expression is as meaningless as "the last word" (of Zen).


Zen Riddle #40-thinking :
What does non-thinking really mean for you?
Here's the answer....(Show/Hide)
Resting your chin on your hand.

Here's an explanation if you want it.
Thinking, meaning, non-thinking, no meaning, nothing real. Don't be mislead.

Deshan one day held up his bowl in his palm* at the lower hall. Xuefeng saw him and asked, "Old fellow, the bell has not sang; the drum has not sounded; where are you going holding your bowl in your palm?”
Shan then returned to the Abbot’s room.
Feng brought it up to show to Yantou.
Tou said, "Spacious Deshan has not met the last phrase."
Shan heard of the decree and had his attendant summon Yantou to come, then asked, "In that case do you not agree with the old monk?"
Yantou secretly explained his meaning, and Shan consequently stopped speaking.
The next day Shan ascended the seat, and thereupon the fruit that he imparted was not the same as usual.
Yantou went to the front of the monks’ hall, clapped his palms with a big laugh, and said, "Now we are able to be happy, the old fellow has met the last phrase! The next people in the days to come after will not be able to do anything with him."

Mumon's comment: Speaking about ultimate truth, both Ganto and Tokusan did not even dream it.
After all, they are dummies.

Wumen says:In the case of this last phrase, both Yantou and Deshan have not seen it in their dreams.
When this is examined in the future, it will seem like they are puppets in a booth.

Whoever understands the first truth
Should understand the ultimate truth.
The last and first,
Are they not the same?

When able to know the first phrase,
Then one meets the last phrase;
Last and first,
Are not that one phrase.