Zen master Joshu was asked
"Has a dog Buddha nature?" Joshu replied: "MU"
(The Koan-answer is the picture's caption!) 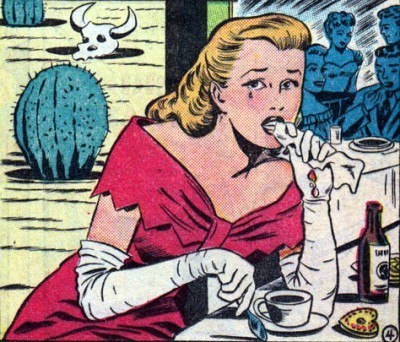 Sorry, this is not a Koan about dogs.
The Koan deals with you, yes, YOU who is reading the Koan right now.

The Koan checks whether you already realised an important difference.
Normally you think about yourself as "I". But that's wrong. Basically you are just a human Being, a Person. A Person that only calls itself "I".
The "I", or this dog, can't HAVE Buddha Nature. Nobody can. It's something one has to BE!

This means the Person, the Being, who's dealing with this Koan, is "Buddha Nature". And this Person has to be shown.
Either by repeating, how the Master showed himself as a Person: "MUUUUUUU !" or, better
by coming forward as an answering Person e.g. just by pointing to yourself, to the "Buddha Nature" you are.

The Koan was quite famous in China, which made the commentaries about it very long.

There are many different versions and strange modernisations.
That doesn't matter. MU is MU full stop. The Koan is traditionally used in many Zen schools, to exhaust the newbies curiosity. Whatever answer is given, it's wrong until the student is totally desperate.

Therefore don't be disappointed if your creative answer is rejected. That's a tradition in Zen.
Try again and again.


Zen Riddle #8 - well :
Looking into a well, a man without shadow is drawing water. Why?
Here's the answer....(Show/Hide)
get some water with your hands

Here's an explanation if you want it.
A man without shadow might be a ghost. Don't bother. Get the water.

Venerable Zhaozhou:
Because a monk asked, "Is the puppy also Buddha Nature or not?"
Zhou said, "Not."

Mumon's comment: For the practical study of Zen, you must pass the barriers set up by the masters of Zen. The attainment of this mysterious illumination means cutting off the workings of the ordinary mind completely. If you have not done this and passed the barrier, you are a phantom among the under-growth and weeds.

Those who have passed the barrier are able not only to have an intimate understanding of Joshu, but also of the whole historic line of Zen Masters,to walk hand in hand with them, and to enter into the closest relation with them. You see everything with the same eye that they saw with, hear everything with the same ear. Is not this a blessed condition? Wouldn't you like to pass this barrier? Then concentrate your whole body, with its three hundred and sixty bones and joints,and eighty four thousand hair-holes, into this Question; day and night, without ceasing, hold it before you. But do not take it as nothingness,nor as the relative "not", of "is" and "is not." It must be like a red-hot iron ball which you have gulped down and which you try to vomit, but cannot.

All the useless knowledge, all the wrong things you have learned up to the present, throw them away! After a certain period of time, this striving will come to fruition naturally, in a state of internal and external unity.

As with a dumb man who has had a dream, you will know it yourself, and for yourself only. Suddenly your whole activity is put into motion and you can astonish the heavens above and shake the earth beneath. You are just as if you had got hold of the great sword of Kanu.

You meet a Buddha? You kill him! A master of Zen? You kill him! Though you stand on the brink of life and death, you have the Great Freedom. In the four modes of the six rebirths you are in a state of peace and truth. Once more, how are you to concentrate on this Mu? Every ounce of energy you have must be expended on it; and if you do not give upon the way, another torch of the Law will be lighted. more./.less?
Wumen says: To meet Zen, you must pass through the founders’ checkpoint. For the wonderful awakening you exhaust the road of the heart-mind to the finish. If you do not pass through the ancestor’s checkpoint, if you do not finish the road of the heart-mind, depletion indeed follows like a tree spirit attached to the grass.
Just say, what is the founders’ checkpoint like? Simply this one single word "Not." That is indeed the one checkpoint of the lineage’s gate! Consequently, this is titled “The Gateless Checkpoint of the Zen Lineage.”
After you are able to pass through this, you not only intimately come face to face with Zhaozhou, then you can take part in the successive generations of founders, walking together holding hands, your eyebrow hairs entangling, seeing with one and the same eye, hearing with one and the same ear. How could it be that you don’t celebrate quickly?
Does it not happen to be essential to pass through this foundation checkpoint? Use your three hundred sixty bones and joints and your eighty four thousand hair follicles throughout your body to start up a single mass of doubt to meet this single word “Not.” Daytime and night-time lift up and tear. Do not establish an association between nothingness and “Not.” Do not establish an association between "Is" and “Not.”
Examine this as if you swallowed a single hot iron ball and vomiting and vomiting doesn’t get it out. First clean and extinguish your foul knowledge and foul consciousness from long long ago, and when naturally mastered, inside and outside become one.
It’s as if the mute person gets a dream allowing only oneself to know. Suddenly and certainly one punches open to frighten heaven and shake the earth. It’s as if you snatch and get General Guan's great sword into your hand, then if you chance to meet Buddha, you kill Buddha; if you chance to meet ancestors, you kill ancestors.
At the top of the high sea-cliff of birth and death you stand ready with great natural ease, and in the midst of the six paths and four births your play is samadhi.

How do you produce lifting up and tearing? Raising the single word "Not," exhaust the strength of your life spirit until levelled. If you do not interrupt for even an interval of space it’s completed, then one spark and you manifest like a Dharma candle.

Has a dog Buddha-nature?
This is the most serious question of all.
If you say yes or no,
You lose your own Buddha-nature.

The Buddha Nature of the puppy,
Fully stated, correctly decreed;
Until you ford across "Is" and "Not",
Dying body, lost destiny.