Buddha twirled a flower. Only Maha-Kashyapa
smiled.Why made him Buddha his successor?
(The Koan-answer is the picture's caption!) 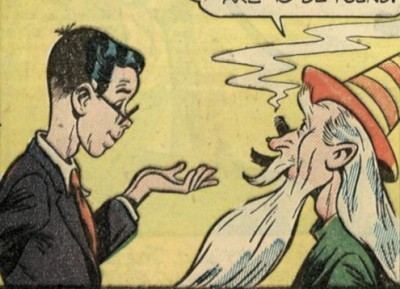 Hold up a flower!

Buddha was an enlightened person, no doubt. What he does is the enlightened answer to any Koan. Just repeat the Buddhas action. It can't be wrong.

When Buddha was in Grdhrakuta mountain he turned a flower in his fingers and held it before his listeners. Every one was silent.
Only Maha-Kashyapa smiled at this revelation, although he tried to control the lines of his face.

Buddha said: "I have the eye of the true teaching, the heart of Nirvana, the true aspect of non-form, and the ineffable stride of Dharma.
It is not expressed by words, but especially transmitted beyond teaching. This teaching I have given to Maha-Kashyapa."

On first glance it sounds like the Christian sermon on the mountain. But it's a Taoist test: without words, who understands the Buddha's teaching best?


Zen Riddle #29-crimson :
Why do crimson lines never cease to flow?
Here's the answer....(Show/Hide)
weep and blow your nose

Here's an explanation if you want it.
When you're crying wipe the tears away and blow your nose.

The World Honored One a long time ago at a convocation on top of Spirit Mountain* picked up a flower and showed it to the multitude.
At that time all the multitude were thus silent. Only Arya Kashyapa gave a broad smile and laughed a little.

The World Honored One said, “I possess the storehouse of the correct Dharma eye, the wonderful heart-mind of Nirvana, the formless true form, the subtle Dharma gate, not established by written words, transmitted separately outside the teaching.

I hand it over and entrust these encouraging words to Kashyapa.”

Mumon’s comment: Golden-faced Gautama thought he could cheat anyone. He made the good listeners as bad, and sold dog meat under the sign of mutton. And he himself thought it was wonderful. What if all the audience had laughed together?
How could he have transmitted the teaching? And again, if Maha-Kashapa had not smiled, how could he have transmitted the teaching?
If he says that realization can be transmitted, he is like the city slicker that cheats the country dub, and if he says it cannot be transmitted, why does he approve of Maha-Kashapa?

As the flower was picked and raised,
The python’s tail was already revealed;
When Kashyapa cracked a smile,
People and gods [devas] were collected in the net.

At the turning of a flower
His disguise was exposed.
No one in heaven or earth can surpass
Maha-Kashapa's wrinkled face.