Hyakujo placed a water jug on the floor.
'Don't call it a water jug.' Isan tipped it over.
(The Koan-answer is the picture's caption!) 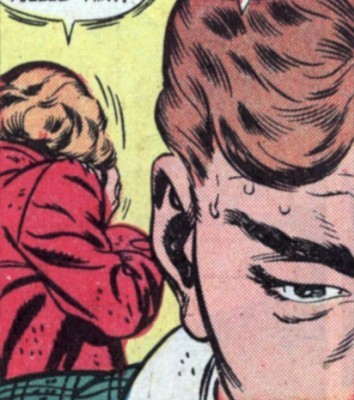 Tip over a jug.

Simple Koan-answer. Just repeat what enlightened Isan did. There is no jug? OK. Just kick it with your foot. It will tip over.

Hyakujo wished to send a monk to open a new monastery.
He told his pupils that whoever answered a question most ably would be appointed.
Placing a water vase on the ground, he asked:
"Who can say what this is without calling its name?" The chief monk said: "No one can call it a wooden shoe."
Isan, the cooking monk, tipped over the vase with his foot and went out.
Hyakujo smiled and said: "The chief monk loses." And Isan became the master of the new monastery.

The full text of the Koan shows, this case is an exact copy of case 23.
Again a test about: Who's the most enlightened person?

This time the price is not only the acknowledgement of enlightenment like in case 23, but also the master-job of a new monastery.
In the contest the head-monk is again beaten an illiterate kitchen-helper. Nothing new.

It's said Isan the new master was already chosen by a magician before the contest started.
The winner wasn't very successful as head of the new monastery. When he was about to quit the master-job a tiger had to remind him to stay until some monks would come, to hear his teaching.


Zen Riddle #54-dwelling :
Where does the mind comes from when it's dwelling from nowhere?
Here's the answer....(Show/Hide)
After breakfast, going in the garden, cleaning my room, cutting a flower (mention your activities).

Here's an explanation if you want it.
The mind is always with you. Where else could it be?

Venerable Guishan: When he was still first at Baizhang among the assembly and filling the Canon-Seat.
Baizhang was going to choose the host of Great Gui, therefore requested the Head-Seat be compared together with the lower crowd, and put forth words to investigate the person who might go there.
Baizhang proceeded to pick up the clean-water-bottle and place it on the floor, setting up a question saying, “You can not call this a clean-bottle. What do you call this?"
Therefore the Head-Seat said, “One also can not call this a tree stump!"
Baizhang still asked from Shan. Shan therefore leaped and tipped over the clean-bottle, then exited.
Baizhang laughed and said, "The First-Seat is defeated, and it’s still Brother Shan!"
This is the reason for the decree to govern the mountain.

Mumon's comment: Isan was brave enough, but he could not escape Hyakujo's trick.
After all, he gave up a light job and took a heavy one.
Why, can't you see, he took off his comfortable hat and placed himself in iron stocks.

Wumen says: Guishan, one time bravely struggled to leave, but jumping from Baizhang’s protecting sty, he did not come forth.
When this is picked up and examined in the future, it will then be heavy, it will not then be light.
For what reason did he win liberation to transfer to his own head to raise and carry the iron cangue?

Giving up cooking utensils,
Defeating the chatterbox,
Though his teacher sets a barrier for him
His feet will tip over everything, even the Buddha.

He tossed down the bamboo strainer and the wooden ladle,
When he positively in one charge cut off the encircling lid.
Baizhang’s heavy checkpoint pen did not stop him.
His pointed feet leapt and put forth Buddhas like flax.