Seijo's soul was separated from her being.
Goso asked, Which was the real Seijo?
(The Koan-answer is the picture's caption!) 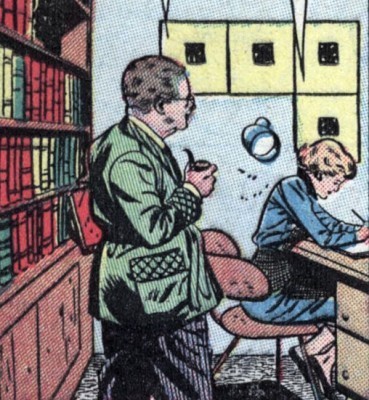 Nice to meet you!

The Koan answer takes away not only the ghosts, the souls, the miracle but the whole story.
What's left are just two people meeting each other. "Nice to see you!"

"Seijo, the Chinese girl," observed Goso, "had two souls, one always sick at home and the other in the city, a married woman with two children. Which was the true soul?"

This Koan refers to a well-known Chinese ghost story.

Seijo, a young girl is in love with her cousin, but the father wants to marry her to another guy. Therefore the cousin went away by boat. But when he arrived Seijo was on board of the same boat.
They were happy, got married had children, but one day Seijo felt guilty having left her father. Both went back.

Miraculously they found Seijo was still in her fathers house, bedridden since many years. But when this Seijo heard about the arrival of the other, the bedridden girl jump out of her bed, hugged the newly arrived Seijo and they became one again.

Therefore the Koan asks, who was the real Seijo, the bedridden girl or the mother of two?

Here's an explanation if you want it.
It's cold. Put on a shirt. Leave the empty sky where it is.

Wuzu questioned the monks saying, "Qiannu parted from her higher-soul. Which one is the true shelter?”

Mumon's comment: When one understands this, he will know it is possible to come out from one shell and enter another, as if one were stopping at a transient lodging house.
But if he cannot understand, when his time comes and his four elements separate, he will be just like a crab dipped in boiling water, struggling with many hands and legs.
In such a predicament he may say: "Mumon did not tell me where to go!" but it will be too late then.

Wumen says:If within you are able to awaken to your true shelter, then you know going out of the husk and entering the husk is like spending the night in a travel lodge.
If you are maybe not yet exactly like that, then do not travel about in confusion.
If suddenly like that, earth, water, fire, and air all scatter, then you are like a crab falling into hot water with seven hands and eight feet. At that time don’t say that I did not speak.

The moon above the clouds is the same moon,
The mountains and rivers below are all different.
Each is happy in its unity and variety.
This is one, this is two.