Master Gutei cut off a boy's finger.
Why was the boy enlightened,
when Gutei raised his finger?
(The Koan-answer is the picture's caption!) 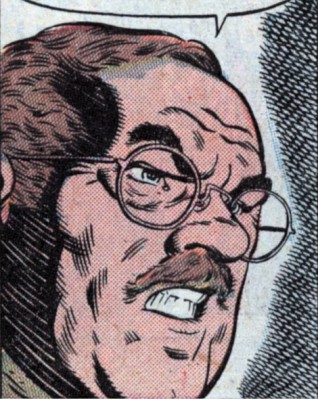 Another Koan using an attractive story on how to achieve enlightenment.
Later Zen monks took the Koan literally and cut off a part of their little finger! Unfortunately no enlightenment happened.

The Koan only demonstrates, cut off a finger gives you terrible pain. Before enlightenment and after the boy is crying. Enlightenment doesn't change pain or anything else. Forget about it.

Gutei raised his finger whenever he was asked a question about Zen. A boy attendant began to imitate him in this way. When anyone asked the boy what his master had preached about, the boy would raise his finger.

Gutei heard about the boy's mischief. He seized him and cut off his finger. The boy cried and ran away. Gutei called and stopped him. When the boy turned his head to Gutei, Gutei raised up his own finger. In that instant the boy was enlightened.

When Gutei was about to pass from this world he gathered his monks around him. "I attained my finger-Zen," he said, "from my teacher Tenryu, and in my whole life I could not exhaust it." Then he passed away.

Here's an explanation if you want it.
How else can you pick a stone out of the water?

Venerable Juzhi: Whenever questioned he raised only one finger. Then afterwards because a visitor asked the attendant boy, “What does the Venerable say is the essential Dharma?", the attendant boy firmly raised his finger tip.
Zhi heard of this and thereupon used a blade to cut off the boy's finger.

When Zhi was going to submit to his life span, he called to the assembly and said,
"When I obtained Tianlong's one fingertip Zen, I received a lifetime of use and did not exhaust it."
When he finished his words he demonstrated the extinction of nirvana.

Mumon’s comment: Enlightenment, which Gutei and the boy attained, has nothing to do with a finger.

If anyone clings to a finger, Tenryu will be so disappointed that he will annihilate Gutei, the boy, and the clinger all together.

Wumen Says: Juzhi’s and the attendant boy’s dwelling in enlightenment does not exist beyond the fingertip.

If from within you are able to see, then Tianlong, together with Juzhi and the attendant boy, give rise to oneself, still with one skewer cutting through.

Gutei cheapens the teaching of Tenryu,
Emancipating the boy with a knife.
Compared to the Chinese god
who pushed aside a mountain with one hand
Old Gutei is a poor imitator.

Juzhi made old Tianlong dull,
He raised a single sharp blade to examine the small attendant.
The childless Giant-Spirit* raised his hand
To break apart Splendor Mountain* into a thousand, ten thousand, attendants.