Tokusan "It's dark outside."
Ryotan gives him a candle and blows it out.
(The Koan-answer is the picture's caption!) 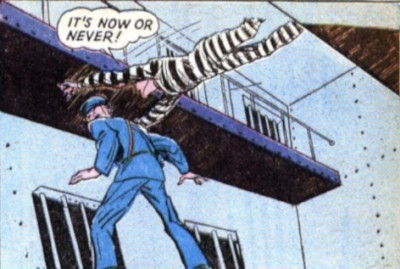 Blow out a candle

It's a Koan with lots of background but the main question is quite short. It's dark outside, the master gives Tokusan a light and immediately blows it out. This strange action could be discussed for a long time. Practically or morally. But what was happening? The candle was blown out. That's it. That's the answer of this Koan.

The long version of the original Koan runs like this:

Tokusan was studying Zen under Ryutan. One night he came to Ryutan and asked many questions. The teacher said: "The night is getting old. Why don't you retire?"
So Tokusan bowed and opened the screen to go out, observing: "It is very dark outside." Ryutan offered Tokusan a lighted candle to find his way.
Just as Tokusan received it, Ryutan blew it out. At that moment the mind of Tokusan was opened.
"What have you attained?" asked Ryutan. "From now on," said Tokusan, "I will not doubt the teacher's words."

The next day Ryutan told the monks at his lecture: "I see one monk among you. His teeth are like the sword tree, his mouth is like the blood bowl. If you hit him hard with a big stick, he will not even so much as look back at you. Someday he will mount the highest peak and carry my teaching there."

On that day, in front of the lecture hall, Tokusan burned to ashes his commentaries on the sutras.
He said: "However abstruse the teachings are, in comparison with this enlightenment they are like a single hair to the great sky.
However profound the complicated knowledge of the world, compared to this enlightenment it is like one drop of water to the great ocean."
Then he left that monastery. more./.less
The burning of the sutras, the invaluable and holy words of the Buddha, is an insult to all other branches of Buddhism, just to signify the superiority of Zen.

Even more important Tokusan challenges the deep rooted Chinese trust in written texts. Studying the Confucian classics was believed to prepare for any government job.
Zen people not even studied their own classics the Koan tells, but claimed to become mature in the single moment of enlightenment.

The traditional comments for this Koan tell a story about the superiority of Zen to written text.


Zen Riddle #55-voices :
How can you follow a Buddha who can't be heard through voices and sounds or seen in colours?
Here's the answer....(Show/Hide)
What a wonderful song and all these pretty red roses. Great.

Here's an explanation if you want it.
Don't follow any Buddha. It's useless.

Longtan (Dragon-Lake): Because Deshan asked more and more and night arrived, Tan said, "The night is deep. Sir, why don’t you go to lie down?"
Shan thereupon gathered his precious baggage, hoisted the [door] blind, and then exited. He saw the outside was pitch dark, withdrew, turned around, and said, "Outside is pitch dark."
Tan then lit a paper measuring-candle and gave it to him.
Shan, intended to accept it, but Tan then blew it out.

At this, Shan suddenly just like that had comprehension, then he made proprieties. Tan said, "Sir, what particular principle of the Way do you see?"
Shan said, "This one, beginning from today, is going to not doubt the tongue(s) of the Old Venerable(s) under heaven!" more./.less
When the next day arrived, Longtan ascended the hall and said,
"Okay, among you is present a single fellow whose teeth are equal to a sword tree and whose mouth is like a bowl of blood.
Hit him with a stick and he will not turn around his head. At another time, a different day, he will ascend to a solitary summit and establish the noble Way."
Shan then took his notes out to the front of the Dharma Hall.
He prepared a torch with fire and carried it in hand, lifting it, he said, "Tracing all obscure discriminations to the very source is like one fine hair sent out into greatest emptiness, exhausting the function of the hub of the world is like one drop thrown into a huge valley."

He readied his notes then burned them. At that he did proprieties and departed.

Mumon's comment: When Tokusan was in his own country he was not satisfied with Zen although he had heard about it. He thought: "Those Southern monks say they can teach Dharma outside of the sutras. They are all wrong. I must teach them." So he traveled south.

He happened to stop near Ryutan's monastery for refreshments. An old woman who was there asked him: "What are you carrying so heavily?"
Tokusan replied: "This is a commentary I have made on the Diamond Sutra after many years of work."
The old woman said: "I read that sutra which says: 'The past mind cannot be held, the present mind cannot be held, the future mind cannot be held.' You wish some tea and refreshments. Which mind do you propose to use for them?" Tokusan was as though dumb. Finally he asked the woman: "Do you know of any good teacher around here?"

The old woman referred him to Ryutan, not more than five miles away. So he went to Ryutan in all humility, quite different from when he had started his journey. Ryutan in turn was so kind he forgot his own dignity. It was like pouring muddy water over a drunken man to sober him. After all, it was an unnecessary comedy.

Wumen says:When Deshan had not yet gone through the opportunity of a checkpoint, he was resentful and indignant in his heart-mind, and bitter in his mouth. He felt the need to go to the southern region to demand that the teaching outside [the sutras] be extinguished and driven away. His purpose was that it didn't propagate.

By this one question Deshan directly got a mouth that seemed like his mouth was full to the brim.
However, even though he was thus, he was not yet ready to face Madam Old Woman’s sentence and he avoided falling dead. Consequently he asked Madam Old Woman, "Is there a lineage teacher present someplace very near?"
The Old Woman said, " Venerable Longtan is present five li* further out."

On reaching Longtan, he received utmost defeat and deficiency. It can be said his prior words did not agree with his later language. The great Longtan seemed to pity his son and not feel shame. Seeing the other had a small quantity of kindling, the master hurriedly prepared bad water and suddenly killed him with one dousing on the head. Coming to observe the situation coolly, the whole operatic act was a good laugh.